The History of Brother:
Over 100 Years in 44 Countries
The origin of Brother can be traced back over 100 years, back to 1908, when Kanekichi Yasui started Yasui Sewing Machine Co. at his home in Nagoya, Japan. Here, he repaired industrial sewing machines and manufactured sewing machine parts for his local community.

Many years later, his sons later inherited the company, and it was renamed Yasui Brothers’ Sewing Machine Company. This was the beginning of Brother. This new company would independently manufacture a Japanese sewing machine that would surpass all machines manufactured overseas, and to this day, continues its unprecedented growth as an industry leader.
Yasui Brothers History
After successfully manufacturing a chain-stitch sewing machine for straw hats in 1928, the Yasui brothers began working on a home lockstitch sewing machine. Mass production of the shuttle hook, an essential component of sewing machines, proved to be difficult given the domestic technology of the time. The Yasui brothers eventually succeeded, and in 1932 their goal of manufacturing sewing machines domestically was achieved with the birth of the “Type 50 Model 70 home sewing machine”. 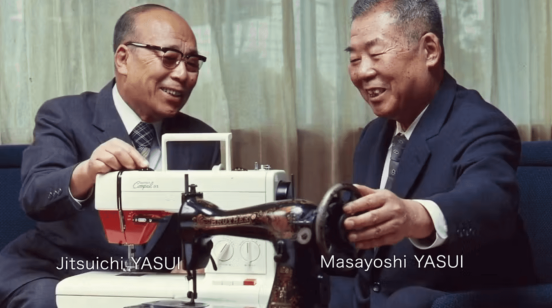 The History of Brother 1920s
Most of the sewing machines repaired at Yasui Sewing Machine Co. were chain stitch sewing machines used to produce straw hats. Die tools and hydraulic presses used to shape the hats and sewing machines were necessary equipment for straw hat manufacturers. Masayoshi built a small new factory to produce hydraulic presses based on original designs and production methods. Masayoshi and his brothers also began making straw hats, and they conducted research into sewing technologies and mastered the basic techniques required for sewing machine production. By 1928, after two years of painstaking efforts, the Yasui Brothers established a new store named Yasui Brothers’ Sewing Machine Co. and launched the first Japanese -manufactured chain stitch sewing machine into the market. They chose the brand name “Brother” to emphasize the cooperation they displayed in realizing their dream. 1950s
Roy Nakagawa, a Japanese American, enlisted in the Army, where his assignment was to teach Japanese to American soldiers at the University of Michigan. After the war, Roy moved to Japan as part of a military project. One of his students from the University was Max Hugel. Together with Bernie Etzin, an American born in Japan, they formed a company that exported Japanese-made novelties to the U.S.A. While meeting with his old teacher, Max told Roy about their company and their extensive U.S. contacts and convinced Roy to join the company. Later, Roy met Mr. Yasui, who owned a company that made sewing machines. Mr. Yasui was looking for someone to distribute his company’s sewing machines in the U.S. as Mr. Yasui’s sewing machines had a reputation for quality and reliability and, as a bonus, had a memorable American name: Brother. Roy, Max, and Bernie approached Brother and asked to become the official U.S. distributors, and the company known as Brother International Corporation was born. At that time, Brother products included home sewing machines, zigzag sewing machines, home knitting machines, electric washing machines, small lathes for schools, and electric fans. 1970s
To finance its rapid product expansion, Brother International Corporation went public in 1972. The event made national history as it enabled Brother to become the first company in Wall Street's history with 50% foreign ownership to receive full S1 SEC ownership. Unfortunately, the timing couldn't have been worse, and because of the mid-70s recession, Brother shares dropped in value. Not wanting shareholders to lose money on their investment, management decided to buy back all shares immediately, and Brother International Corporation became a privately held company once again in 1976. During the 70s, Brother products included electric and computerized sewing machines, computerized monogramming machines, punch card knitting machines, computer keyboards, calculators, industrial sewing machines, manual and electric typewriters, dot matrix printers, and more! 1979
While the 70s were coming to an end, Brother was still moving forward, and in 1979, Brother introduced the Computer-Sew 1000, the first computerized home sewing machine. Compact, versatile, and with a small array of included accessories, the Computer-Sew 1000 continued Brother's trend as the industry leader. 1980s
The 1980s were a decade of commitment and vision. The marketplace had changed, and new channels of distribution were evolving. Brother began to circulate higher-end products to dealers and entered a new distribution channel called “the office superstores.” Here, Brother continued to be ‘at your side’ with intelligent, in-demand product solutions, essential programs, and support. Brother knew it had to expand its product offerings and this is best evidenced by the introduction of its first models of fax machines and word processors in 1987. 1991
1991 saw the release of the first Brother Home Embroidery Machine, the PC7000, which was a computerized sewing machine with an embroidery function. The machine had a memory card which enabled the reproduction of 900 types of patterns, and colorful embroidery using a maximum of 5 colors. Video tutorials displayed basic operations and sewing methods, plus the machine had an automatic thread cutter, and an automatic thread tension adjuster, which highlighted its ease of use. 1990s
Thanks to aggressive marketing and product development, Brother went from a $200 million company in 1984 to a $1 billion company in 1997. Brother also wanted to demonstrate a “think locally” approach while understanding the inherent benefit of “acting globally” and in 1994 instituted an internationally accepted system for overseeing all aspects of supply chain management. In 1998, an R&D and manufacturing facility was established in Bartlett, Tennessee, and sales territories were expanded to include Canada, Mexico, Brazil, and Chile. Later that year, Brother moved its US corporate headquarters to a new state-of-the-art office complex centrally located in Bridgewater, New Jersey. The 1990s also saw the launch of Brother.com, where consumers could easily navigate the company’s wide range of categories and products on the internet. 2000s
A half-century after it took the home sewing world by storm, Brother introduced two incredible new machines, the ULT-2002D and the PE-180D. These two groundbreaking units took the home/craft sewing dynamic to the next level. These new machines integrated technologies that were designed to simplify virtually any sewing task. Whether users chose the embroider-only PE-180D, with its full range of built-in Disney designs, or the ULT-2002D, which added sewing functions, they now had a choice to enhance their sewing experience. As the 2000s progressed, Brother hit a milestone in 2014 as they manufactured its 50 millionth machine since 1933! 2000
As Brother set their sights on the 21st century, the release of the groundbreaking ULT2001, the first Brother computerized sewing & embroidery machine with a color display, Brother again took the home sewing industry to a new level. With over 100 built-in stitches and nine included feet to create with, the release of the ULT2001 was a great way to start the new millennium. 2008
In the year 2008, Brother ushered in the ultimate creative partner in sewing, embroidery, quilting and crafting, the NV6000D. This new machine came with 100 new and improved features including industry firsts such as InnovEye™ Technology, an Up Close™ Viewer function and Runway™Lighting. With the NV6000D, inspiration was standard. 2020
Because Brother believes that “at your side” is more than a marketing term, new products are designed to keep old loyalties intact. Brother made a name for itself in the ’50s and ’60s by challenging leaders in competing categories, and that drive is still apparent today. While other companies are content to use words like “synergy,” Brother creates products that defy it- like its revolutionary state-of-the-art lineup of home sewing, embroidery, quilting, and crafting machines. Reinventing and redesigning our work isn’t new for Brother. We have always been a pioneer in our industry. The past six decades have brought us great rewards, and we look forward to the future as we continue to be a driving force in innovation and creativity.